Failing to Advise about Insurance 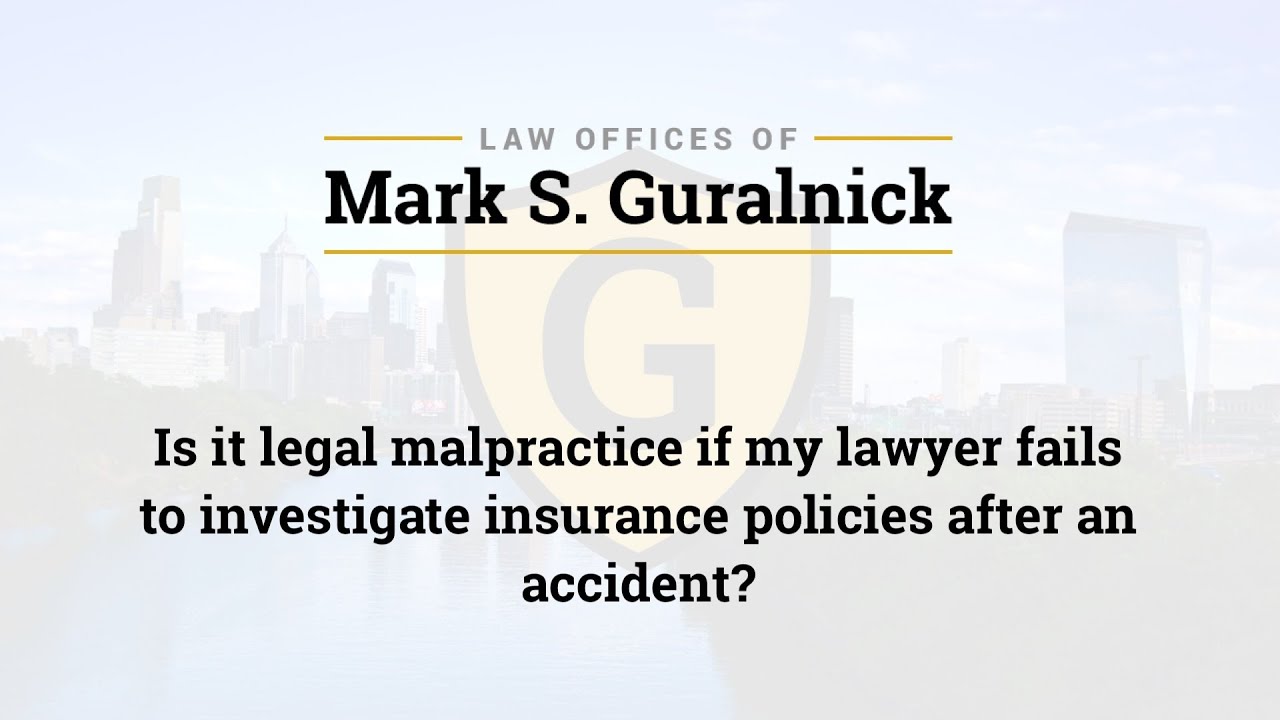 An attorney has a duty to advise clients about possible sources of insurance coverage and about the impact of insurance on any settlements. Let’s break this down into a few scenarios.

First, if you are a client who has been served with a lawsuit, the law firm has a duty to interview you comprehensively about all your insurance policies and to pry deeper, whenever possible, to determine if there is any insurance coverage. When you have insurance that covers the issue raised in the lawsuit, then you won’t need to pay a private lawyer, out of pocket, to defend you in that lawsuit. Moreover, if you lose that lawsuit, or choose to settle it, you won’t be paying the judgment or the settlement with your own money. If a lawyer fails to determine whether any insurance policy would possibly cover you, and then you get stuck with the legal fees for defending the lawsuit and/or paying any judgment, then you may have a claim against that law firm for negligently failing to advise about insurance.

This very issue was illustrated in a 2016 case in New York, entitled Soni v. Pryor. In that case, a lawsuit was filed against a company and its officers for fraud and conversion. The lawsuit claimed that the individual officers and directors who had been sued had aided and abetted the company in committing the fraud. According to the lawsuit, the attorneys had failed to advise them that they had insurance coverage under an insurance policy issued by the National Union Fire Insurance Company in Pittsburgh, Pa. That policy contained a “directors and officers” section that could have potentially covered the officers who were being sued. When the officers subsequently sued the lawyers for legal malpractice because they failed to advise them about the insurance policy, the lawyers tried to have the lawsuit dismissed – but the New York Supreme Court, Appellate Division, refused to grant their motion.

“My Neighbor Deliberately Rammed My Car While I was in it, And Now I Cannot Get My Insurance Company to Cover It”

What if you are injured during an act of road rage? The other driver’s insurance company may refuse to cover the accident because his insurance policy contains an “intentional acts” exclusion. This means that insurance companies are generally covering only true accidents – negligent events – not intentional or deliberate acts of violence. But did your lawyer fully investigate the facts to determine if there was a negligent aspect to the case? For example, was the road-raging driver drunk after being served too much alcohol at a local tavern? If so, there may be other insurance policies that would cover his misconduct. Your lawyer also has a duty to activate all other coverage available to you, if the other driver’s insurance company refuses coverage. In such an event, you may become what is known as an “uninsured motorist.” Then, you could potentially make a claim under the “UM” portion of your own auto insurance policy. In fact, you can also make a claim under your personal injury protection (PIP) coverage. Since you did not commit any intentional act, you are, therefore, not excluded from coverage. If your lawyer fails to perform this analysis, and fails to qualify you for whatever insurance is available, you may have a claim for legal malpractice.

What if your lawyer fails to tell you about an insurance lien? Imagine that you spend months negotiating a settlement in your case. Every dollar counts, and you’re holding out for the best settlement you can get. You’re asking for $250,000, but the defendants are offering only $150,000. Back and forth you negotiating, and finally you settle the case for $200,000. Then, the lawyer tells you, for the first time, that you have to pay $50,000 back to Blue Cross, or back to the federal Medicaid/Medicare system. What?

In fact, the law requires clients and lawyers to repay many of their insurance providers in different kinds of cases. So, if Blue Cross or Medicaid or some other insurance program paid for your medical treatment, they may have an automatic lien against any settlement you recover. If a lawyer failed to tell you about this, and you didn’t realize it when you accepted the $200,000 settlement, then you may have a claim for legal malpractice.

These are just a few examples of the many different ways lawyers can negligently represent you by failing to investigate, advise, inform and address insurance issues.

What Lawyers Must Do

A good, conscientious attorney will take a series of steps to ascertain what kind of insurance exists and applies to your case: